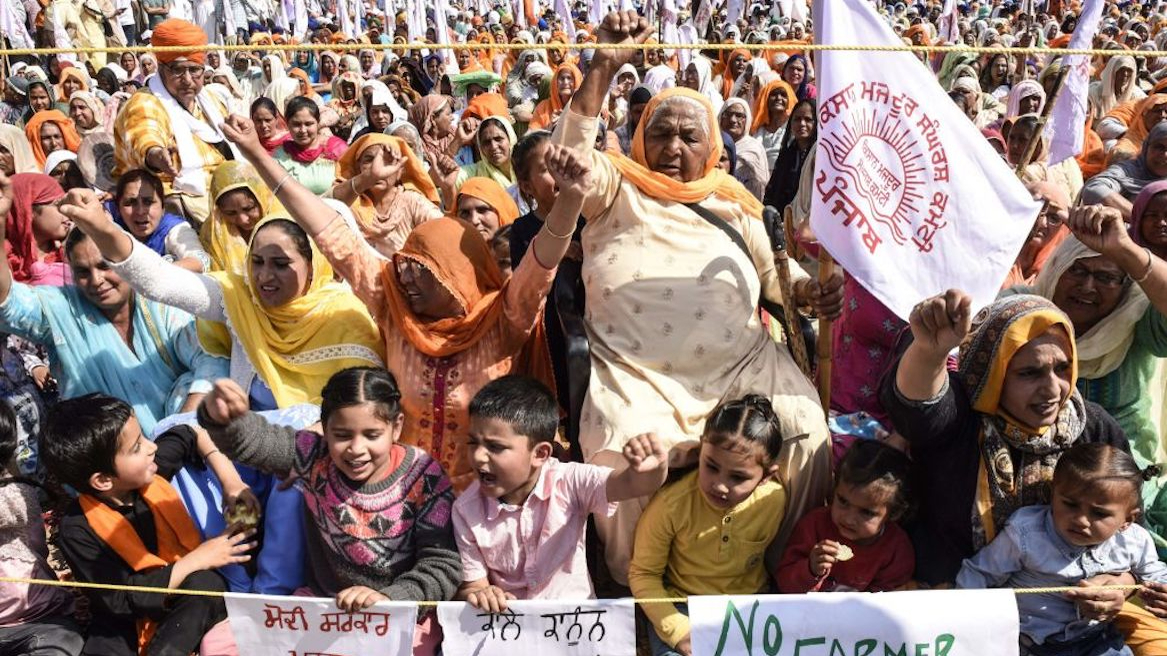 Implementing three new agricultural reform acts in September sparked months-long protests by farmers and farming unions in India. As explained in a Vox interview , the three acts worked to deregulate three different sectors of the farming-trading system, and many farmers felt that the new laws leave them at the mercy of larger agribusiness and corporations.

The second act, the "Farmers (Empowerment and Protection) Agreement on Price Assurance and Farm Services Act'', detailed new rules for the contract farming system. Contract farming is a system where buyers agree to purchase a farmer's crops at a predetermined price. Most times, the purchaser issues payments before the delivery of crops. In a sense, farmers secure loans through contract farming and most times use their land as collateral. With the new rules, land could no longer be collateralized for contract farming loans. In theory, this would protect farmers' land from being taken from them following a bad agricultural season. However, as Jagmohan Singh Patiala , the general secretary of the Bharatiya Kisan Union explained, "the history of contract farming has many examples of non-payment by the companies making various excuses like substandard produce". For farmers who have taken loans through contract farming, this results in a likely debt trap. In such cases, farmers are unable to repay the loans resulting in a land loss.

Credit access is becoming a critical requirement for smallholder farmers in India. Contract farming is one way to access credit, but the other ways are not very appealing either. A commonly touted example of credit access is the Kisan Credit Card scheme (KCC). Through KCC, the national government provides farmers with "timely access to credit" to pay for needed agricultural inputs at low interest rates. If loans are paid off within a year, there is no interest rate. Like the contract farming act, this sounds good on paper, but in reality, it has become another debt trap for many farmers. According to an article published by the Stanford King Center on Global Development , "after a bad season, the incentive to repay KCC loans on time is high since farmers must avoid defaulting to remain eligible for future low-cost loans. Without the money to repay the full loan, farmers turn to other village residents to borrow the balance of what they owe. This money from the informal market usually has very high interest rates. So right after a new KCC loan becomes available, it is used to repay farmers' informal debt." Effectively, farmers can easily fall into a hole where they cannot appropriately use the credit given to them.

One theory to resolve these debt traps was to cancel loans. Leading up to the 2019 general elections in India, some state governments canceled farm debt to win over farmers. However, as a banker noted in a Reuters article , "even though some states announced the scheme years ago, the money has still not reached the bank so technically the farmer's account is a non-performing asset for us and we can't give more loans till the outstanding is cleared." This ended up restricting farmers' access to new credit in 2020. As agricultural production plummeted with Covid-19, banks became even more reluctant to lend new credit to farmers. The lack of credit forced farmers to turn to informal moneylenders who charged nearly two-fold the typical interest rate from 24 to 36% to 48-60%. Normally, banks charge 4-10% interest, but because of the pandemic and the poorly implemented loan waivers, many farmers find themselves in another debt cycle.

With these pitfalls, inefficiencies, and unintended consequences, credit access remains a minefield for Indian smallholder farmers. Renita D'souza of the Observer Research Foundation wrote in an article a set of recommendations to improve credit access issues. Impact investments and Fintech were two of the recommendations suggested. Researches favor impact investing as it is "patient" capital. Using FinTechs' like AgroFides is preferred because credit assessment through AgroFides looks further than the financial statements of farmers and focuses on farmers' abilities and character. AgroFides's improved underwriting process allows for equitable loan appropriation for farmers.

According to the Modern Farmer , roughly ten farmers a day commit suicide in India, and debt is a primary reason. Tensions between the farmers and the national government have been growing for a long time following the Green Revolution. Solving issues facing farmers requires innovative solutions, not merely deregulation.